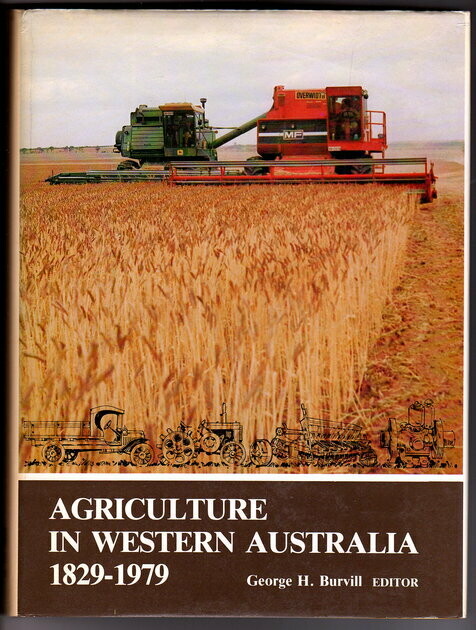 Secondhand. Book and jacket are in very good condition. Minimal edgewear. Dust jacket has some light creasing at top edge. Previous owner has signed inside page.

Western Australia made very slow progress from 1829 till the gold rush of the 1890s. Isolation, infertile soils, lack of portable water, poisonous but palatable indigenous plants all made farming and pastoral pursuits very difficult. Sheep and cattle multiplied, however, and from 1963, the natural grazing lands of the North-West were utilised in vast holdings.

When the 1890s brought the gold seekers, much of the human food and animal feed was imported. Sir John Forrest encouraged farming through free homestead farms and government loans to settlers. The Bureau of Agriculture provided technical advice from 1894.

Superphosphates were introduced in the 1890s. They improved the fertility of soils substantially, especially on the coastal sand plains and ironstone gravel soils of the forest country of the South West.

The 20th Century witnessed tremendous progress, especially in the winter rainfall areas of the South West of the state. The determination of farmers combined with scientific and technical expertise combined to solve many unique plant and animal problems. Wheat and wool became the major products, with Western Australia becoming a major contributor to the country's production. (back book flap)