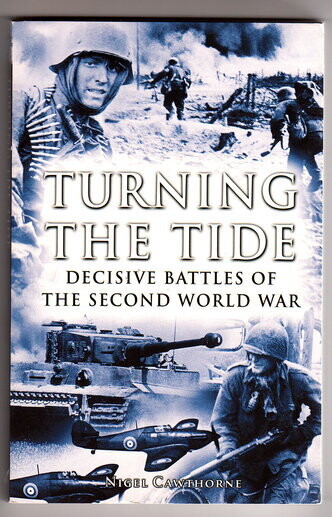 Turning the Tide: Decisive Battles of the Second World War by Nigel Cawthorne

Secondhand. Very good condition. to book edges and corners. One page has been dogeared.

The Second World War was the final global conflict of the twentieth century. It involved more combatants, and a wider range of battlefield terrain than any other conflict in history, from the frozen plains of Russia to the baking Libyan desert, and from the atolls of the Pacific to the skies over Britain.

In Turning the Tide, Nigel Cawthorne has taken a fresh look at the crucial battles which decided the outcome of the Second World War, beginning with the evacuation of Dunkirk in 1940, a feat that boosted the morale of Britain during its darkest hour and reaching a climactic end with the final bloody reckoning between the Red Army and the Third Reich amongst the ruins of Berlin. (publisher blurb)