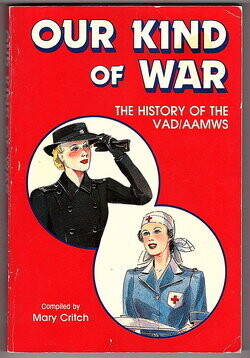 Our Kind of War: The History of the VAD/AAMWS compiled by Mary Critch

Secondhand. Good condition. Wear to book corners and edges. Foxing to foredges. A few marks and scratches to front and back covers. Interior and binding are very good.

Women of the Voluntary Aid Detachments (VAD) and of the Australian Army Medical Women's Service (AAMWS) served as aids to the professional staff of the medical service. They worked in Sri Lanka, Palestine, Egypt, on the Dutch hospital Ship Oranje, in all Australian mainland states, in Papua New Guinea and Singapore.

Others accompanied British occupation forces in Japan and served in the 130 A G Hospital at the beginning of the Korean War.

Eventually, the VAD/AAMWS were absorbed into the Royal Australian Army Nursing Corps in 1951.

Mary Critch who saw service herself combines personal histories with official documents and photographs to create an absorbing history of the VAD and AAMWS.