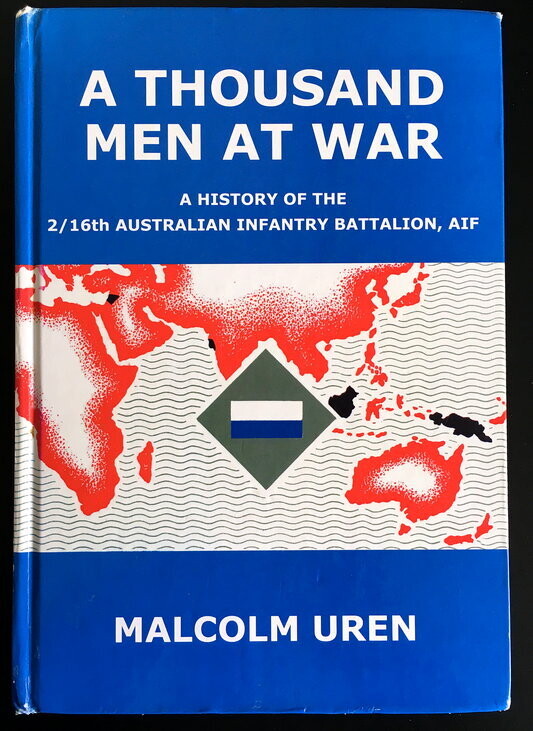 A Thousand Men at War: A History of the 2/16th Australian Infantry Battalion, AIF by Malcolm Uren

Secondhand. Good condition. Wear to book corners and spine. Ex library copy with no external stickers. Date due slip on inside page. Book is clean and binding still very good.

The 2/16th Battalion had an outstanding record during the course of the Second World War, both in the Middle Eastern theatre during 1941 and then the South-West Pacific from 1942 until 1945.

The unit first saw service during the Syrian Campaign of mid-1941, when it fought a series of engagements at Litani River, Sidon and Damour, thus removing Vichy French forces from Middle East.

Early in 1942, the battalion returned home to man the so-called ‘Brisbane Line’ but in August, with sister battalions in the 21st Brigade, they were hurried to Papua and sent into the Owen Stanley Ranges to repel the Japanese drive towards the vital Port Moresby airfields.

What followed was weeks of fighting withdrawal along the Kokoda Track that were vital in delaying and finally turning back the Japanese advance.

In late 1943 the 2/16th was sent into the Ramu / Markham Valley Campaign against Japanese forces. The audacious heroism of the Battle for Shaggy Ridge and the Battalion’s part in that series of actions, has since become military legend.

In the final phase of the war, in 1945 they were part of the major invasion of the oil town of Balikpapan on Borneo.

Originally raised from Western Australian volunteers, the battalion suffered heavy casualties and, through reinforcements, came to represent an Australian wide cross-section of soldiers. (back cover)