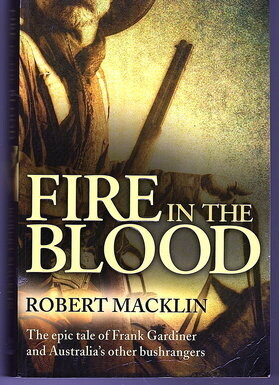 Fire in the Blood: The Epic Tale of Frank Gardiner and Australia's Other Bushrangers by Robert Macklin

A ripping yarn about bushranging in Australia in the 19th century told through the eyes of the quintessential Australian bushranger, Frank Gardiner - the only one who wasn't killed by gunshot or hanging. He was the champion of the have-nots. He was a gentleman to the core. And he was Australia's most notorious bushranger.

One hundred and fifty years ago, Frank Gardiner rose from nowhere to become the most famous outlaw in the country. His gang included Ben Hall, Johnny Gilbert and a team of desperadoes who brought large tracts of inland New South Wales to the brink of anarchy. Yet he boasted that he never hurt a woman or ever committed a mean or petty act. When finally captured, Gardiner became the first and only Australian ever to be exiled from his homeland.

Gardiner electrified the colony of New South Wales in June 1862 with the biggest robbery of all - the hold-up of the Lachlan gold escort at Eugowra Rocks. By the standards of the day, it was bigger than Britain's Great Train Robbery and much bigger than any Australian heist before or since.

Now, in a vivid tour de force, Robert Macklin combines meticulous research with a brilliant imagination to recreate Gardiner's world in the back blocks of Australia and in the land of his exile, the United States. It is a rattling good yarn, an epic drama and a heart-rending love story. But it also provides a unique insight into the young colony at a time when class oppression sparked rage in the underdog and set fire in the blood' among the rebels of the bush. (back cover)