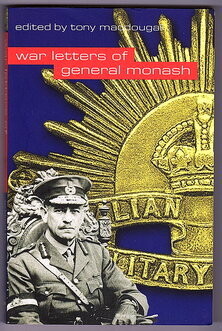 The War Letters of General Monash edited by Tony Macdougall

A personal account of WWI by Australia's greatest general, who was also probably the best general on the Allied side on the Western Front.

John Monash was only a reserve soldier before the war, but as a civil engineer, he grasped earlier than most professional soldiers the necessity for meticulous planning and communication of one's plans in modern warfare.

Contains stirring accounts of the withdrawal from Gallipoli, a two-hour meeting with King George of England in France, and what it felt like to manage tens of thousands of men.

First published in 1934. this edition is edited by Tony McDougall.