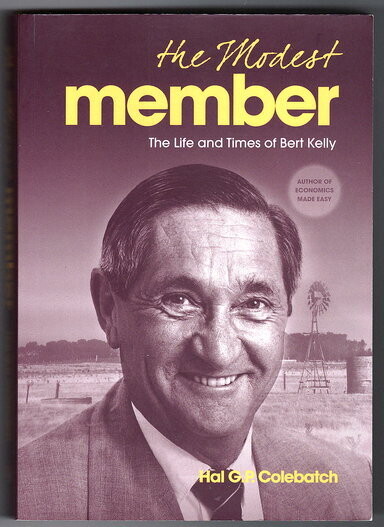 The Modest Member: The Life and Times of Bert Kelly by Hal G P Colebatch

The story of Bert Kelly, MP for the South Australian seat of Wakefield from 1958 to 1977, is the story of one of the most influential parliamentarians in the history of the Commonwealth.

Bert Kelly was never ambitious in the sense that is usually applied to politicians. His ambition was not to attain high office but to change opinion within the parliament and the community at large about protectionism and the harm which tariffs had done to Australia since they were introduced by Alfred Deakin in 1902.

Bert Kelly was almost alone and isolated in this great undertaking, but his gifts as a writer and as a political strategist eventually brought success when, after he had retired from parliamentary politics, the Hawke-Keating Government in 1984 began dismantling the protectionist structure which had impoverished Australia for more than 80 years.

He was known as “the Modest Member”, the title he used for his influential column in the Australian Financial Review. His powerful opponent, Sir John (Black Jack) McEwen, Deputy Prime Minister and Minister for Trade, described him in the Parliament as “the modest member with much to be modest about”.

But it was Bert Kelly who won this great contest, and his victory has been of inestimable benefit to all Australians. (back cover)