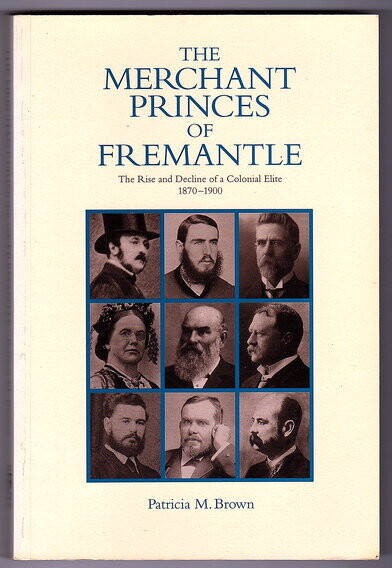 The Merchant Princes of Fremantle: The Rise and Decline of a Colonial Elite, 1870-1900 by Patricia M Brown

Among the people who lived in Fremantle in the late 19th century, some occupied mansions on high ground from which they could look down on those they employed, led, governed and admonished. They did not have immense wealth, the heads of these households may be compared to the merchant princes of the Italian Renaissance. Like them, they lived in places, engaged in trade and provided civic government, social order and culture. They were patriarchal, noble, dedicated and generous, but also capable of injustice and oppression.
The Merchant Princes of Fremantle forces mainly on the families of Bateman, Diamond, Higham, Lilly, Manning, Moore, Pearse and Samson. In examining their role in Fremantle's development, it celebrates their achievements, their heritage and their contribution to Western Australia, particularly in regard to the creation of the harbour and the development of democratic government. (back cover)