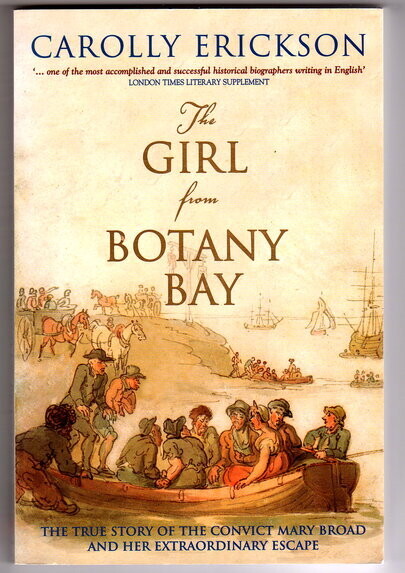 The Girl From Botany Bay: The True Story of the Convict Mary Broad and her Extraordinary Escape by Carolly Erickson

In The Girl from Botany Bay, distinguished historian and biographer Carolly Erickson tells Mary Bryant's (nee Broad) remarkable story at full length for the first time--the story of a woman whose impoverished Cornwall childhood led to a life of outlaw daring and thievery, then to harsh imprisonment and exile. Erickson recounts Mary's bold ventures from her point of view, beginning with her conviction and death sentence for highway robbery. Reprieved, she was sent to New South Wales to serve out her time, one of the dozens of female convicts chosen as sexual companions for the hundreds of male convicts destined for settlement in the remote continent of Australia.
From Mary's perilous sea journey to Botany Bay and Sydney Cove to the inhuman conditions at the penal colony, to the risky escape to the Indonesian island of Timor and the horrors of the sail back to England--during which Mary's husband and two children died of disease--the story is harrowing yet heroic. With the dramatic narrative skill for which she is acclaimed, Erickson brings Mary and her companions to life in compelling detail. All the dangers of seafaring adventure are here: violent storms, near-drownings, severe hunger and thirst, and the perils of relentless exposure to sun, wind, and salt spray that left the convicts with their skin scraped raw and their strength leached away.

When she finally landed in England and testified before the magistrate's court, Mary was magnificent in her own defence. No one had the heart to condemn her; had she not, through her suffering, paid for her crimes? Impressed by Mary's sturdy self-possession and courage, lawyer and author James Boswell came to her rescue, ensuring that "the Girl from Botany Bay," as the newspapers called her, was freed and able to begin a new life.

The epic story of Mary Bryant, the brave and resourceful girl from Botany Bay, is compelling narrative nonfiction at its very best. (publisher blurb)