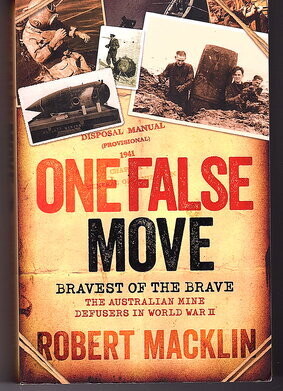 One False Move: The Australian Mine Defusers in World War II by Robert Macklin

The gripping, untold story of a small band of Australians who specialised in defusing mines in and around Britain in World War II.

It is a story of sheer courage and skill - incredible bravery combined with the precision of a surgeon - as these men defused deadly mines, often dropped in residential areas. The detonators were frequently booby-trapped by the Nazis, and these Australians and their British colleagues came to recognise the twisted minds and methods of the individual bomb makers as they worked.

Both sides played a deadly game of chess as they tried to bluff and outwit the other. In the ultimate demonstration of skill and bravery, it was the Australian Leon Goldsworthy, specialising in underwater defusing working at depth, and often by touch alone - who worked out how to defuse the K mine, and so made possible the neutralising of the German mine defences before the invasion of Normandy.