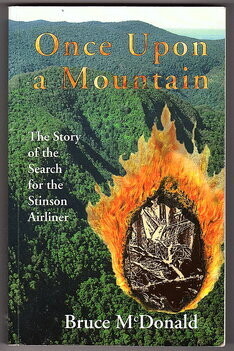 Once Upon a Mountain: The Story of the Search for the Stinson Airliner by Bruce McDonald

When the Stinson airliner VH UHH City of Brisbane flying a routine service flight from Brisbane failed to arrive in Sydney on Friday afternoon 19 February 1937, it raised little concern. When a cyclonic depression moving down the Queensland NSW coastline, it was believed the plane would have landed to shelter from the weather - to fly on later when conditions had improved.

By Saturday lunchtime, it was evident that the luxury airliner had disappeared. The largest air search in Australia's history was mounted but as the days passed, the hope of finding the plane or its seven passengers vanished. The official search was abandoned seven days after the disappearance.

Bernard O'Reilly, a bushman set out on a two-day search across the most rugged country between the Brisbane and Sydney air route. He did not expect to succeed where others had failed.