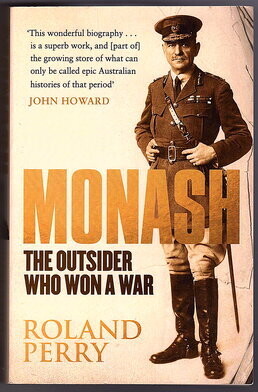 Monash: The Outsider Who Won a War by Roland Perry

Australian general Sir John Monash changed the way wars were fought and won. When the British and German high commands of the First World War failed to gain ascendency after fours years of slaughter never before seen in human history, Monash used innovative techniques and modern technology to plan and win major battles, forcing Germany to capitulate. His obsessional, brilliant planning, coupled with a ruthless streak, caused him to break the German army in a succession of battles that led to the end of the Great War.

Author Roland Perry brings to life the fascinating story of the man whom many have judged as the greatest-ever Australian. Monash: The Outsider Who Won A War draws on the subject's comprehensive letter and diary archive - one of the largest in Australia's history. The result is a riveting portrait that reaches the heart of the true Monash character. It weaves together the many strands of his life as a family man, student, engineer, businessman, lawyer, renaissance man, teacher, soldier, leader, romantic and lover of the arts. (back cover)