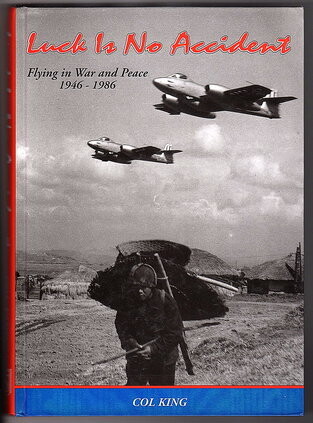 Secondhand. Good condition. Minor edgewear. Moisture damage has resulted in a wobble to pages. Pages are not stuck together. A very readable copy.

Col King began his career at the De-Haviland factory in aircraft engineering. He joined the Royal Australian Air Force and was among the first to fly jet fighters serving with No 77 (Fighter) Squadron at Kimpo in Korean during the 1950-53 conflict.

He subsequently undertook extensive photographic survey mission in Mosquitos, and served on Neptune P2V5 Maritime aircraft. On leaving the RAAF he enjoyed an extensive civil flying career with Qantas, Malayan Airways and East-West Airlines. (back cover)