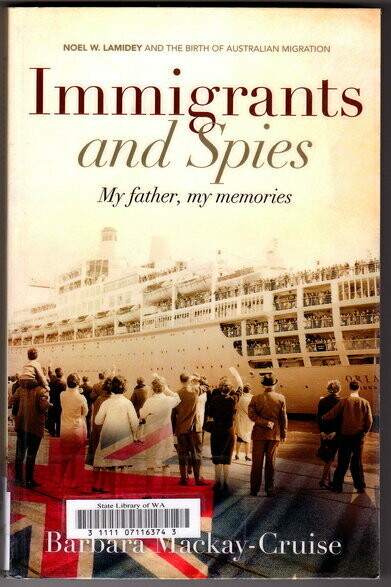 Immigrants and Spies: My father, My Memories: Noel W Lamidey and the Birth of Australian Migration by Barbara Mackay-Cruise

Immigrants and Spies is the story of Noel W. Lamidey, who in 1946 was sent to London by the Chifley Government to establish Australia’s Migration Scheme. It describes the trials and tribulations he had in establishing such a gigantic organisation for Australia in another country.

In 1950, Lamidey spoke on behalf of the Australian Government at the International Refugee Organisation (IRO) Conference held at the Palace de Nations, Geneva, to say that Australia would take two million migrants.

Whilst in London he worked closely with MI5 and MI6 to ensure that migrants from Axis countries, who had carried out heinous crimes against humanity, did not have a chance of getting to Australia.

Written by his daughter Barbara, Immigrants and Spies is the absorbing inside story of Australia’s extraordinary Migration Scheme. (back cover)