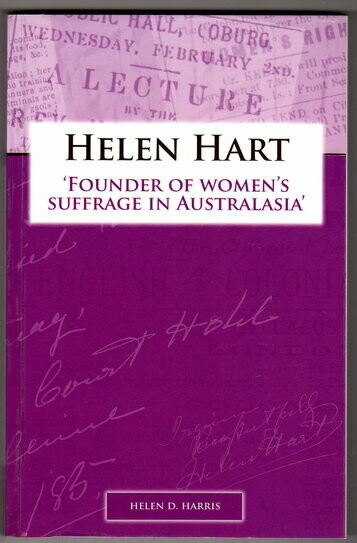 Secondhand. Very good condition. Minimal edgewear. Ex library book with all external stickers removed. Book is covered in protective plastic. Date due form is stuck to inside cover. Book is clean and binding is very good.

Helen Hart was born in 1842 in Birmingham England. In her childhood, Hart became involved with anti-slavery and temperance movements, and began open-air preaching from the age of 19. In 1876, she was on the executive committee of the National Society for Women's Suffrage.
In 1879, carrying references from leading English clergymen, Hart sailed to New Zealand, as matron in a migrant ship. Failing to find employment, she returned to the lecture stage and travelled the South Island, speaking on a number of topics, including women's rights. A year later she arrived in Melbourne and continued to preach on a wide range of subjects, including public health, temperance, politics and women's rights.

For the rest of her life, Hart continued to lecture and preach, and sell her portraits and poems, in almost every city and country town in Victoria and numerous others in New South Wales and South Australia.

She claimed to be the founder of women's suffrage movement in Australasia.