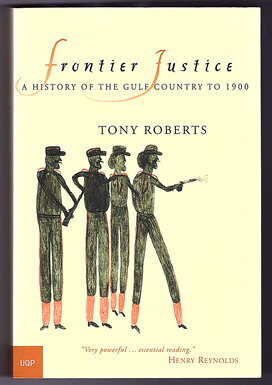 Frontier Justice: A History of the Gulf Country to 1900 by Tony Roberts

Secondhand. Very good condition. Minor edgewear. This is a rare copy. At the time of listing, there are only two other copies for sale. Both are over A$150.00.

This book brings a fresh and illuminating perspective to the Northern Territory's frontier era.

For the newcomer, the Gulf country-from the Queensland border to the overland telegraph line, and from the Barkly Tableland to the Roper River was a harsh and in places impassable wilderness. To explorers like Leichhardt, it promised discovery, and to bold adventurers like the overlanders and pastoralists, a new start. For prospectors in their hundreds, it was a gateway to the riches of the Kimberley goldfields. To the 2,500 Aboriginal inhabitants, it was their physical and spiritual home. From the 1870s, with the opening of the Coast Track, cattlemen eager to lay claim to vast tracts of station land brought cattle in massive numbers and destruction to precious lagoons and fragile terrain. Black and white conflict escalated into unfettered violence and retaliation that would extend into the next century, displacing, and in some areas destroying, the original inhabitants.

The vivid characters who people this meticulously researched and compelling history are indelibly etched from diaries and letters, archival records and eyewitness accounts. Included are maps with original place names and previously unpublished photographs and illustrations. (back cover)