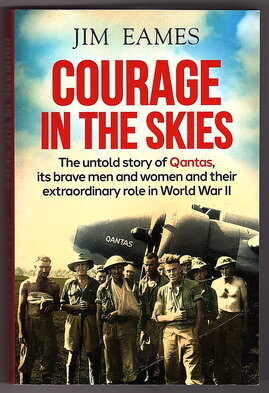 Courage in the Skies: Untold Story of Qantas, its Brave Men and Women and Their Extraordinary Role in World War II by Jim Eames

This is a story of truly heroic deeds during the fall of Singapore, taking munitions and military personnel up and refugees back, of escape and subterfuge as crews prepared for these dangerous operations.

It tells of how Qantas confronted the Japanese advance into Indonesia and on to Timor, of its planes being shot down by Japanese Zeros, and the little mentioned bombing of Broome during which 14 flying boats were destroyed and many lives were lost.

Then there are the Papua New Guinea campaigns, the highlights of which are the rescue of 90 Australian civilians who made it through to Mt Hagan after the Japanese took Rabaul and the airline's involvement in the great battles of Kokoda, Buna and Gona.

This is a story of an extraordinary group of Australians who confronted the dark days of World War II with bravery, commitment and initiative. They just happened to be Qantas people. (back cover)