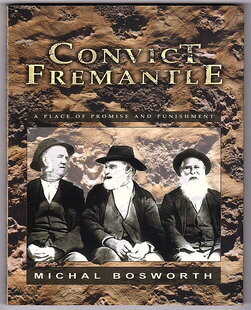 Convict Fremantle: A Place of Promise & Punishment by Michal Bosworth

Long recognised for its fine old buildings, the cosmopolitan port city of Fremantle held special significance as the first landfall of early settlers to the Swan River Colony. For them, it offered the promise of a new life, but for thousands of convicts transported to the colony after 1850, the future was far darker.

Michal Bosworth takes the reader on a fascinating journey through nineteenth century Fremantle, a journey centred on the grim complex of buildings set up to house the prisoners. She paints vivid pictures of the lives of prison officials and convicts, some confined for 21 hours a day in cells barely more than five cubic metres; and she chronicles the attempts of desperate inmates to escape a Dickensian establishment that can still be visited today as a heritage site and tourist attraction.