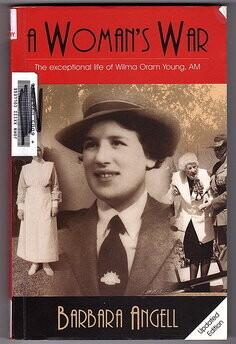 A Woman's War: The Exceptional Life of Wilma Oram Young, AM by Barbara Angell

This is the story of one of Australia's most remarkable women. As a captive of the Japanese during World War II, Wilma Oram, a young Australian nurse, experienced the very worst of human brutality: starvation, deprivation and degradation. Yet, through comradeship of her fellow prisoners, she also encountered humankind at its best.

After subsisting for three-and-a-half years on a diet of filthy rice and rotten vegetables, emptying sewage pits with half a coconut shell, and preparing her own coffin nails, Wilma's life after liberation could never be ordinary.

Following her return to Australia, she was inspired to help her fellow ex-POWs and war veterans through her tireless work with the RSL. As a public speaker, she strove to instil in her younger generation an awareness of the futility of war.

Wilma Oran Young was a woman of inner strength and profound humanitarianism. This inspirational and sensitive account of her unique life is a moving and evocative tribute to a silent angel.