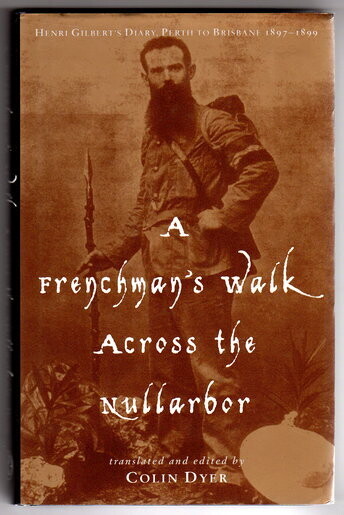 A Frenchman’s Walk Across the Nullarbor: Henri Gilbert’s Diary, Perth to Brisbane 1897–1899 translated and edited by Colin Dyer

In the late 19th Century, French journalist Henri Gilbert set out to walk around the world. When Gilbert came to Australia he crossed the continent from Perth to Brisbane.

It took Gilbert five and half months to cross the Nullarbor Plain. He kept a diary of his crossing in his meticulously tidy hand. Colin Dyer uncovered Gilbert's diary while he was browsing in the John Oxley Library in London.

The diary includes photographs of Gilbert and the people he met on his way, as well as cuttings from local newspapers. At each stop, the diary is authenticated by a signed attestation from the station-master, hotel owner, postmaster or the local mayor.

A fascinating historical curiosity and a most entertaining glimpse of colonial Australia through a foreigner's eyes.