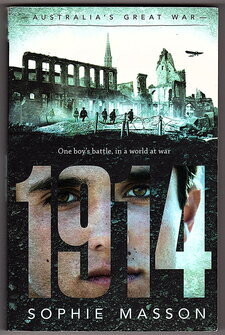 Secondhand. Good condition. Wear to book corners and edges. Some marks on tail inside front cover and half-title page.

Louis Jullian and his older brother Thomas are on holiday in Sarajevo, enjoying the privileges of life in a diplomat's family. But the peace is shattered as a bomb explodes and the heir to the Austrian Empire is assassinated in front of their eyes.

As Europe descends into war, Louis convinces his parents to let him go to the front as a war correspondent. Sent to northern France, Louis witnesses the war's first battles and the beginning of trench warfare.

His friends - from Australia, England, France, Austria, and Russia - join the war effort too, with - and against - each other.