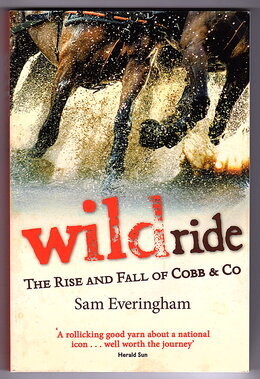 Wild Ride: The Rise and Fall of Cobb & Co by Sam Everingham

In 1853, a young American arrived in the new colony of Victoria hoping to make his fortune from the world's greatest gold rush. He soon realised where the real money was to be made and established a coach company that would eventually carry his name into every household in the land: Cobb & Co.

But Freeman Cobb himself was long gone by the time the company bearing his name became an Australian legend. Wild Ride is the story of two extraordinary men, James Rutherford and Frank Whitney, who along with their business partners took Freeman Cobb's humble company and made it into an Australian legend. These were pioneers, carving a path through otherwise impassable terrain, settling unsettled land, enduring bushrangers and terrible accidents, and making their fortunes. The Rutherford and Whitney families became two of the most significant of their era, unrivalled in their influence and, finally, vicious in their falling out.

Written with unprecedented access to these families' letters and diaries, Wild Ride reveals the Cobb & Co story in all its drama, conflict and tragedy. It is the compelling and human story of Australia's first great company and the people who made it an icon. (publisher blurb)