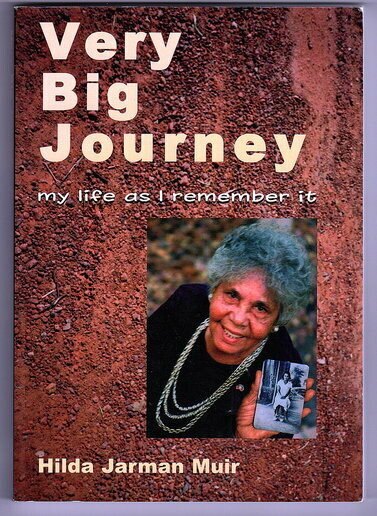 Very Big Journey: My Life as I Remember it by Hilda Jarman Muir

Secondhand. Good condition. Some wear to book edges. Some marks on foredge.

This is the autobiography of the remarkable Hilda Muir, who was born near Borroloola in the Northern Territory in about 1920.

Her early life was spent roaming the Gulf Country with her family, hunting and gathering. Her Mother was a Yanyuwa person and so was Hilda. Her Father was an unknown white man. Hilda was forcibly removed from her family and sent to Kahlin Home for half-caste children.

As an young women with her husband Billy Muir, Hilda and her family endured the evacuation of Brisbane during WWII. By the 1970s, Hilda was back in Darwin and witnessed the devastation of Cyclone Tracy.

In 1995, Hilda Muir was chosen to present a writ to the High Court on behalf of her fellow stolen generation, asserting that the removal of children was immoral and illegal. In 1997 the writ was rejected.

In 2000, Hilda finally travelled back to her Yanyuwa land and was recognised as an owner and custodian of that country.