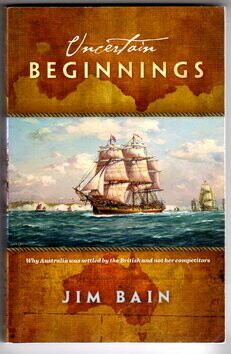 Uncertain Beginnings: The Remarkable Story of How Australia was Colonised by the British Rather Than the Portuguese, the Spanish, the Dutch or the French by Jim Bain

In this book, Jim Bain explains why Australia was settled by the British and not by the Portuguese, Spanish, Dutch or French, all of whom had shown interest in the Great South Land.

In the late 1400s, under the leadership of Prince Henry the Navigator, Portugal developed into a leader in the discovery of new oceans and islands. However, in 1580, the Spanish invaded Portugal and the country became subservient to the Spanish Crown.

Spain also had its setbacks: the disastrous voyage of Magellan in 1520 to 1523, with its terrible loss of life and only one ship out of five returning home.

Between 1605 and 1644, the Dutch charted most of the Australian mainland, principally through the activities of Abel Tasman. However, after 1645, they lost interest in exploration around the Great South Land.

The French were very unlucky in their attempts to discover, and probably settle, the east coast of Australia. Bougainville was prevented, in 1768, by the Great Barrier Reef and La Pérouse, with his well-equipped expedition, sailed away from Botany Bay in 1788, never to be seen again.

By the time of Lieutenant James Cook’s epic voyages of exploration to the South Pacific in 1768 and 1772, Britain was the strongest economy in Europe and had the most powerful navy. In 1783, the British decided to transport convicts to New South Wales. Occupation of the new port of Sydney would cement Britain’s claim to the colony. (back cover)