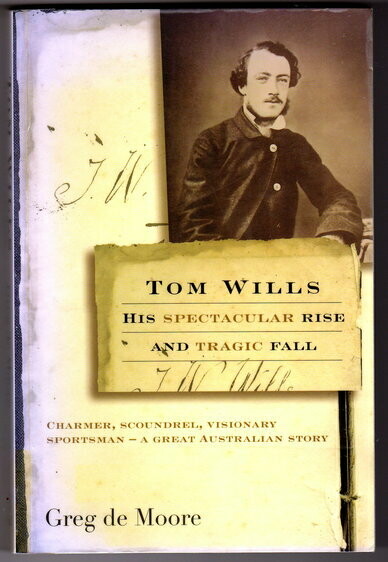 Secondhand. Very good condition. Ex library book with a protective plastic covering and external stickers removed. Date due form and stamps on inside pages. Book has minimal edgewear, is clean and binding is still very good.

This is the story of Tom Wills - flawed genius, sporting libertine, fearless leader and agitator, and the man most often credited with creating the game we now know as Australian Rules football.
Sent to the strict British Rugby School in 1850 at fourteen, Tom returned as a worldly young man whose cricket prowess quickly captured the hearts of Melburnians. But away from the adoring crowds, in the desolation of the Queensland outback, he experienced first-hand the devastating effects of racial tension when his father was murdered in the biggest massacre of Europeans by Aboriginal people. Yet five years later, Tom coached the first Aboriginal cricket team.

Tom Wills lived hard and fast, challenging authority on and off the field. But when his physical talents began to fade, the psychological demons that alcohol and adrenaline had kept at bay surged to the fore, driving him to commit the most brutal of suicides. He was forty-four and destitute.

Greg de Moore has carefully pieced together Tom's life, giving us an extraordinary portrait of the life and times of one of our first sporting heroes, a man who lived by his own rules and whose contribution to Australian history has endured for more than 150 years. (backcover)