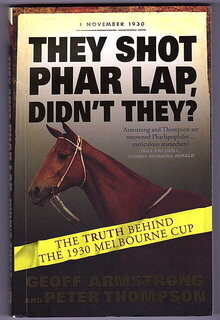 They Shot Phar Lap, Didn't They? The Truth Behind the 1930 Melbourne Cup by Geoff Armstrong and Peter Thompson

Phar Lap's rise to greatness in 1930 triggered extraordinary excitement across Australia but it also spooked bookmarkers, who faced ruin if the horse won the Melbourne Cup. Rumours circulated that Phal Lap would be stopped, regardless of the cost.