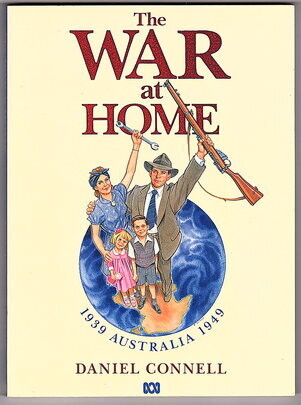 For those Australians who remained at home, World War II was an extraordinary period, a time of excitement, anxiety, austerity and glamour. Men, women and schoolchildren all had to deal with a range of experiences for which nothing had prepared them.

Using the words of people of all ages who remember the home front, Daniel Connell has assembled a mosaic of life in Australia during these years. Material for The War at Home comes from interviews and letters collected for an ABC Radio series in 1986 and deals with a wide range of subjects: home and school life, work, the problems of aliens, wartime bureaucracy.

Some people have more specific recollections – the Knackeroos, for example, an elite group of men sent to the Northern Territory to learn how to live off the land in case of invasion; and witnesses to the bombings of Sydney Harbour, Darwin and Broome.

The War at Home is not an official history but a human document about a time in Australia that profoundly affected a generation. As one interviewee says ‘It was a hard rite of passage…we will never forget it and it should not be forgotten when we’re gone'. (back cover)