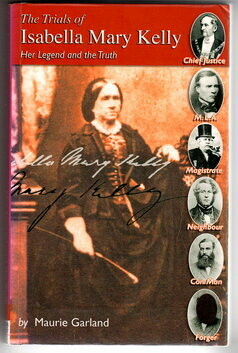 The Trials of Isabella Mary Kelly: Her Legend and the Truth by Maurie Garland

Secondhand. Good condition. Ex library copy with protective plastic covering. Inside title page has been removed. General edgewear. Book has been cleaned and binding is good.

Isabella Mary Kelly (no relation to Ned) was born in Dublin, and arrived in Australia in 1835, a wealthy single woman. Isabella became the third settler in the Manning Valley, north coastal New South Wales. She was a pioneer, ran her property herself, using assigned convict labour.

Isabella was disliked by her male counterparts who lived nearby and was eventually accused and wrongly convicted of stealing her own cattle in 1859. She spent twelve months in Darlinghurst Gaol.