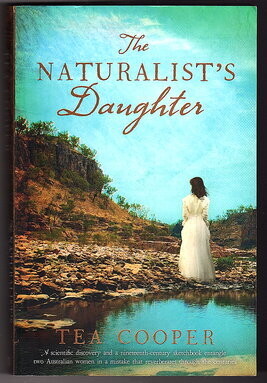 The Naturalist's Daughter by Tea Cooper

Two women, a century apart, are drawn into a mystery surrounding the biggest scientific controversy of the nineteenth century, the classification of the platypus.

1808 Agnes Banks, NSW. Rose Winton wants nothing more than to work with her father, eminent naturalist Charles Winton, on his groundbreaking study of the platypus. Not only does she love him with all her heart, but the discoveries they have made could turn the scientific world on its head.

When Charles is unable to make the long sea journey to present his findings to the prestigious Royal Society in England, Rose must venture forth in his stead. What she discovers there will change the lives of future generations.

1908 Sydney, NSW. Tamsin Alleyn has been given a mission: travel to the Hunter Valley and retrieve an old sketchbook of debatable value, gifted to the Mitchell Library by a recluse. But when she gets there, she finds there is more to the book than meets the eye, and more than one interested party.

Shaw Everdene, a young antiquarian bookseller and lawyer, seems to have his own agenda when it comes to the book but Tamsin decides to work with him to try and discover the book's true provenance. The deeper they delve, the more intricate the mystery becomes.

As the lives of two women a century apart converge, discoveries rise up from the past and reach into the future, with irrevocable consequences… (back cover)