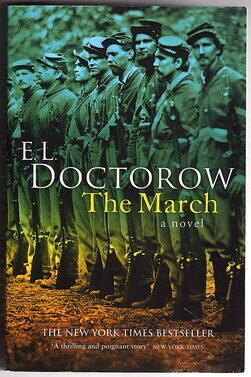 The March: A Novel by E L Doctorow

Doctorow's new novel is set towards the end of the American Civil War and follows General Sherman's epic march with sixty thousand Union troops through Georgia and the Carolinas, one of the major manoeuvres to bring the war to its conclusion.

The March ranges widely over a diverse set of characters - each of whom is brilliantly realised - so that we see the war through the eyes of both white-skinned Pearl (daughter of slave and slave owner) and General Sherman; a deserting Confederate who sets himself up as a photographer; a ruthless army surgeon who enjoys his reputation as an amputator; and the two brothers of a brutal slave owner who find themselves in uniforms facing Sherman's forces.

Doctorow's narrative brilliantly blends the intimate and the epic, sweeping the reader along the route of Sherman's notorious march and making us care deeply about each individual's fate. (publisher blurb)