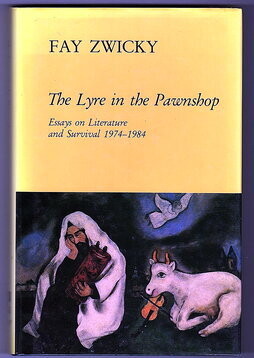 The Lyre in the Pawnshop: Essays on Literature and Survival 1974 - 1984 by Fay Zwicky

Secondhand. Very good condition. Would be a fine copy except it has fading to dust jacket spine.

The essays cover a wide range of subjects. Balanced between roles as poet, fiction writer, teacher, critic, and ordinary member of society, the author looks at general questions affecting Australian identity in literature.

Eight essays are devoted to problems of cultural and linguistic adaption faced by displaced European consciousness in an alien environment. Probing the interchange between assertiveness and social responsibility, the author investigates external influences that hinder or promote national independence; the decline of language and conceptual thought; the theme of love and the treatment of women and sex in Australian fiction and poetry; the threat of ideological rhetoric to lyric utterance; and the repression of minority voices in a democracy.

Eight shorter reviews cover a broad spectrum of contemporary Australian, American and British poetry. In addition to essays on Sylvia Plath, and the extremity of Holocaust experience in Paul Celan's poetry, there is an interview with American poet Denise Levertov, and nine radio commentaries focusing on the state of modern poetry ad its cultural context.

Bringing to bear a background of European moral and literary awareness, The Lyre in the Pawnshop sets up standards of comparison seldom applied in Australian literary criticism. (book flap)