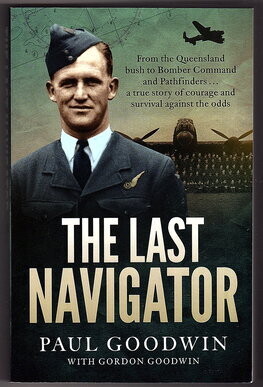 The Last Navigator by Paul Goodwin with Gordon Goodwin

With the choking, chest-tightening feeling of being trapped in a burning Lancaster, enduring the uncertainty, you count down the requisite 60 seconds for the tanks to blow. Your skip has thrown off the fighters with yet another brilliant corkscrew manoeuvre but will you get your badly wounded bomber home?

Gordon Goodwin was a decorated airman and an inspired leader. During World War II he served in probably the most dangerous occupation of all, flying with the Pathfinders as they led bombing raids into Germany. He undertook 32 Pathfinder missions, including nine over Berlin, and 65 missions over enemy territory with Bomber Command.

But to survive his childhood was perhaps a greater achievement. Raised in harsh and loveless circumstances outside Brisbane during the Depression, his accomplishments were remarkable. This is a powerful first-hand account of Gordon's dangerous and brave war experiences as recalled by his son Paul. 'My father told me that to survive you had to surrender all hope.'

That extraordinary formula followed by the men of Bomber Command allowed Gordon to not only come through the war, but to find a successful career with Qantas, finishing as its chief, and possibly last, navigator. The Last Navigator is an illuminating, compelling and ultimately uplifting insight into a time that should not be forgotten. (back cover)