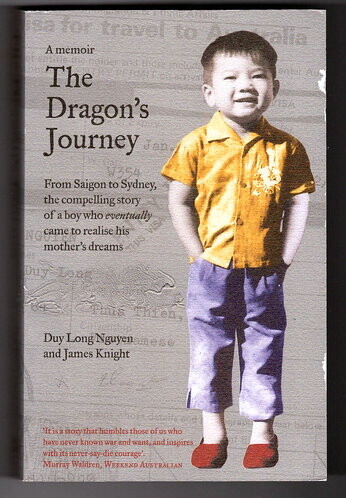 The Dragon's Journey by Duy Long Nguyen and James Knight

Duy Long Nguyen (Longy) left Vietnam, with his mother's blessing, on a boat bound for anywhere safe. He carried with him too many memories of war. He had seen things no child should ever see.

Fate saw him eventually arrive in Australia. Determined to find his way in his new country, he battled racism and struggled for acceptance.

He found work as a bodyguard and was soon straddling both sides of the law. After surviving a shoot-out in Sydney's Chinatown, he helped uncover corruption in the New South Wales police force.

Then, turning his back on violence, he realised he had a very special gift - taught to him by indigenous tribes in the jungle of Vietnam and never forgotten - the gift to heal.

His hands are now his trade and his magic, and his client list reads like a who's who of celebrities. From movie stars to millionaires, models to media magnates, Longy's ability is much in demand. (back cover)