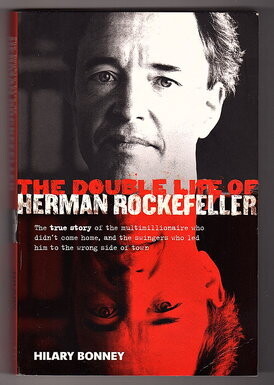 The Double Life of Herman Rockefeller by Hilary Bonney

In January 2010 a law-abiding, church-going father of two from Melbourne's leafy eastern suburbs didn't come home after a business trip and his burnt remains were found in a northern suburb - the wrong side of town - a week later.

A police investigation uncovered the shocking truth: Herman Rockefeller met with an alcoholic single mum and her older boyfriend for sex and the liaison had gone horribly wrong. Was the respectable, successful businessman (worth $400 million) leading a double life as a swinger? Why didn't he just pay for whatever sex took his fancy instead of taking the sordid option? How did the two very different worlds of killers and victim connect in the first place?

Rockefeller has taken some answers to the grave, but Hilary Bonney takes us right inside the world of the killers and behind the scenes of the investigation to bring us the story of the multimillionaire who fell from grace. (back cover)