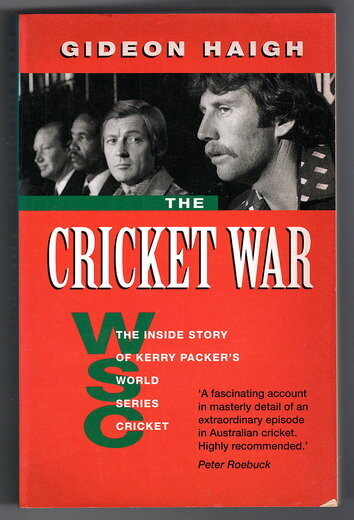 The Cricket Wars by Gideon Haigh

In May 1977, the cricket world woke to discover that a 39-year-old businessman called Kerry Packer had signed thirty-five elite international players for his own televised World Series Cricket.

The Cricket War is the definitive account of the split that changed the game on the field and on the screen. In helmets, under lights, with white balls and in coloured clothes, the outlaw armies of Ian Chappell, Tony Greig and Clive Lloyd fought a daily battle of survival. In boardrooms and courtrooms, Packer and cricket's rulers fought a bitter war of nerves.

A compelling account of top-class sporting life, The Cricket War also gives a unique insight into the motives and methods of the tycoon who became Australia's richest man. (back cover)