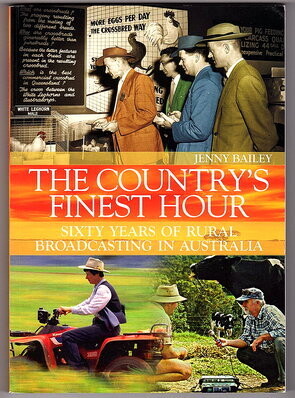 Late in 1945, the newly formed ABC Rural Department put to air a one-hour program that was to become a household word throughout Australia. In 2005, the Country Hour and the Rural Department celebrate their sixtieth anniversary.

From the outset, the men and women of the Rural Department formed close connections with country Australia. Working largely in isolation, travelling great distances to record stories and often struggling with less than adequate equipment, many were great characters with a well-developed sense of humour as well as empathy with their listeners.

In this delightful book, a chatty, informal record of ABC Rural radio and television, they tell some of the stories behind the extraordinarily popular programs they produced. The book also features listener stories to add to this lively and important history. (publishers blurb)