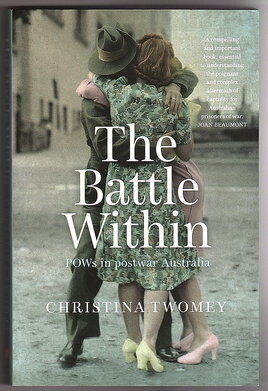 The Battle Within: POWs in Postwar Australia by Christina Twomey

This landmark and compelling book follows the stories of 15,000 Australian prisoners of war from the moment they were released by the Japanese at the end of World War II. Their struggle to rehabilitate themselves and to win compensation and acknowledgement from their own country was just beginning. This moving book shows that ‘the battle within’ was both a personal and a national one.

Prize-winning historian Christina Twomey finds that official policies and attitudes towards these men were equivocal and arbitrary for almost forty years. The image of a defeated and emaciated soldier held prisoner by people of a different race did not sit well with the mythology of Anzac. Drawing on the records of the Prisoner of War Trust Fund for the first time, this book presents the struggles of returned prisoners in their own words. It also shows that memories of captivity forged new connections with people of the Asia-Pacific region, as former POWs sought to reconcile with their captors and honour those who had helped them. (publishers blurb)