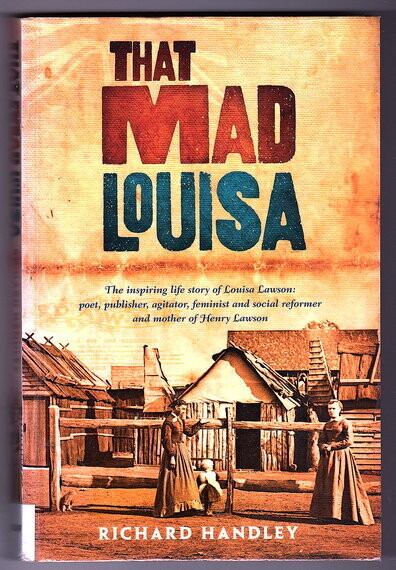 That Mad Louisa: The Life Story of Louisa Lawson: An Outstanding Character in Australian History by Richard Handley

The inspiring life story of Louisa Lawson: poet, publisher, feminist and social reformer and mother of Henry Lawson. Louisa Lawson was acknowledged as Australia's foremost feminist writer in the 1800's. Henry's view of his mother was as a domineering, interfering mother, and painted her as a careless, uncaring and sexually repressed wife.

Louisa Lawson was considered mad. Towards the end of her life, two doctors certified her and she was committed to the Hospital for the Insane in Gladesville. At the time, many people who knew her would have said that she had always been mad. Was she, as many claimed, 'Henry's awful mother'? Was she ineffectual in realising feminist goals? And was she mad or was she simply a victim of circumstances or were there other reasons for her strange behaviour?

Despite this view of her, when women achieved the vote in Australia in 1902, Louisa was publicly acknowledged as 'the mother of womanhood suffrage' in New South Wales. She had been, without doubt, Australia's foremost feminist writer for many years but subsequently, in his epic work, History of Australia, Manning Clark wrote that she had 'no ideas on the origins of the subordination of women'.

An admirer of Henry Lawson's work from his youth, after reading about Louisa Lawson, Richard Handley researched her life in an attempt to clearly establish her place as 'one of the grand figures of Australian history' and a pioneer of the women's movement. (publisher blurb)