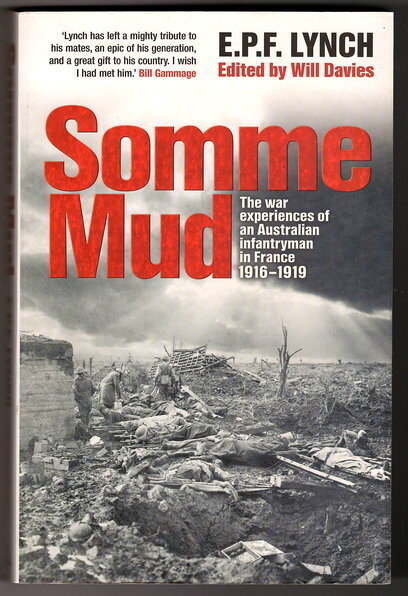 Somme Mud: The War Experiences of an Australian Infantryman in France 1916-1919 by Private E P F Lynch edited by Will Davies

Somme Mud tells of the devastating experiences of Edward Lynch, a young Australian private soldier (18 when he enlisted) during the First World War when he served with the 45th battalion of the Australian Infantry Forces on the Western Front at the Somme, which saw the most bloody and costly fighting of the war. In just eight weeks, there were 23,000 Australian casualties.

The original book of twenty chapters was written in pencil in twenty school exercise books in 1921, probably to help exorcise the horrendous experiences he had witnessed during his three years at war from mid-1916 until his repatriation home in mid-1919. Lynch had been wounded three times, once seriously and spent over six months in hospital in England.

Somme Mud is a precious find, a discovered treasure that vividly captures the magnitude of war through the day-to-day experiences of an ordinary infantryman - and this is a rare book for that reason, as most war memoirs have been written by officers.

From his first day setting sail for France as the band played 'Boys of the Dardanelles' and the crowd proudly waved their fresh-faced boys off, to the harsh reality of the trenches of France and its pale-faced weary men, Lynch captures the essence and contradictions of war.

Somme Mud is Australia's version of All Quiet on the Western Front. Told with dignity, candour and surprising wit, it is a testament to the power of the human spirit, a moving true story of humanity and friendship. (publisher blurb)