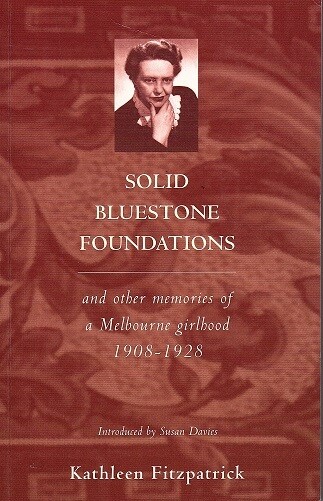 Secondhand. Good condition with some edgewear.

Described by Manning Clark as a "magnificent book of memories". 'Hughenden', the seaside mansion of Kathleen's grandparents, provided the 'solid bluestone foundations' of her somewhat peripatetic youth, offering her a haven of emotional security and material abundance.

The puzzled observations and alert curiosity of a highly intelligent child are vividly recreated in these beautifully written recollections, which paint an evocative picture of middle-class life in Melbourne in the early years of the twentieth century.

The divisions between her Catholic and Protestant grandparents, and the contrast between the dedicated civil servants on one side of the family and the energetic entrepreneurs on the other, are depicted with the sharp-eyed acuity of youth. Kathleen's mediocre schooling, the awakening of her feminist consciousness, her discovery at the University of Melbourne of her true vocation as a historian and her unhappy experiences at Oxford are major themes of her memoir.

The book is greatly enhanced by Susan Davies' Introduction, family tree and other materials, offering valuable new insights and information for historians, those interested in women's lives, and scholars of Australian autobiography. A classic work among Australian memoirs.