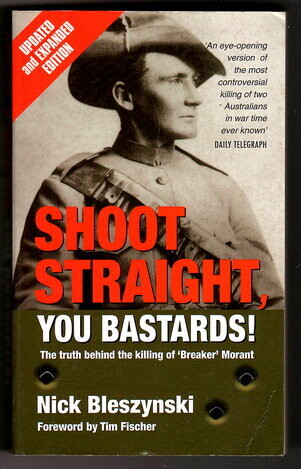 Shoot Straight, You Bastards!: The Truth Behind the Killing of ‘Breaker’ Morant by Nick Bleszynski

A fascinating insight into Breaker Morant and the question of morality and human life.

The question of "The Breaker's" innocence is still fiercely debated more than a century after Lieutenant Harry Morant and Lieutenant Peter Handcock were shot on a lonely veldt outside Pretoria at dawn on 27 February, 1902, by a British military firing squad.

Shoot Straight, You Bastards! is a universal account of greed, ambition and the power of the political machine that crushes anyone who gets in the way. In every war there is a character like Morant - a rebellious spirit who ends up on the wrong side of the "great cause".

This updated edition includes an appendix containing dramatic new evidence that Kitchener gave orders to "take no prisoners". Expert legal opinion supporting the Breaker's innocence and a strong campaign to secure a proper judicial review combine here in a story Australians have waited more than a century to read. (publisher blurb)