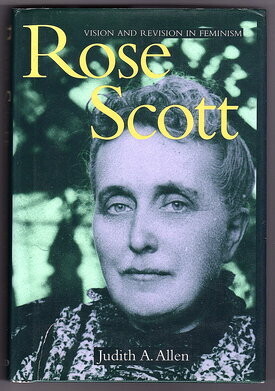 Rose Scott: Vision and Revision in Feminism by Judith A Allen

Rose Scott (1847-1925) is a central figure in the history of feminist thought and reform in Australia. Judith A Allen's path-breaking study provides the first detailed account of Scott's remarkable record of cultural criticism and activism.

Tracing several elements of that record, including Scott's place in a complex colonial family history, her diverse web of friendships and networks, her involvement with woman suffrage and with movements concerned with sexuality, pacifism, sex equality, social policy and government, Allen identifies a crucial transformation in Scott's feminism.

In the 1880s and 1890s, Scott's initial feminist vision featured a united polity of women citizens working, through legal and political measures, to end the 'degradation' of their sex. By the 1920s Scott had revised her understanding and strategy towards a focus on the pursuit of sexual 'emancipation'. This shift reflected the impact of Scott's confrontation with the differences in position and interests between women. Hitherto, such differences, including those organised around aboriginality, race, ethnicity, class, sexual and conjugal identities, had not threatened the unity of women in the minds of Scott and her feminist peers.

Rose Scott: Vision and Revision in Feminism contributes to international debates amongst historians and theorists of feminism by demonstrating the value of moving beyond a disavowal of past feminists for their blindness to differences between women. Allen makes a powerful case for a historical reassessment of that 'blindness' and the political and philosophical framework that sustained adherence to 'the cause of women', so that the background of the many paradoxes besetting contemporary feminism may be appreciated more fully. (book flap)