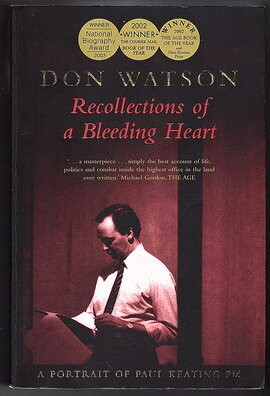 Recollections of a Bleeding Heart: A Portrait of Paul Keating PM by Don Watson

In December 1991 Paul Keating wrested the Prime Ministership from Bob Hawke and the bruises from that struggle were part of the baggage he brought to the job. The other parts included the worst recession in 60 years and an electorate determined to make him pay for it.

Keating defied the odds and won the 1993 election, and in his four years as Prime Minister set Australia on a new course - towards engagement with Asia, a republic, reconciliation, a social democracy built on a modern export-based economy and sophisticated public systems of education and training, health and social security.

Widely regarded as a quintessential economic rationalist, Keating's record clearly shows that his vision was infinitely broader and more complex.

In 1992, shortly after Paul Keating won the Federal election, Don Watson overcame initial reservations to accept the post of speech-writer for the new Prime Minister. Although trained in history rather than economics, and generally regarded as a "bleeding heart liberal", he became a close advisor and friend. This book is based on the diaries Watson kept during those four tumultuous years (book flap)