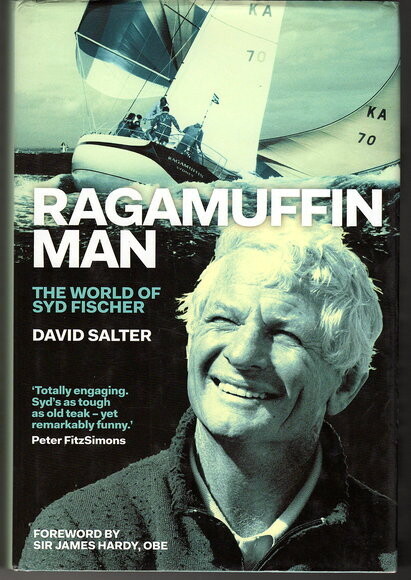 Ragamuffin Man: The World of Syd Fischer by David Salter

Secondhand. Good condition. Wear to book corners and edges. Dust jacket is in very good condition with light creasing at top and tail. Book interior and binding are still excellent.

In 1938 a knockabout 11-year-old working-class kid from Marrickville, Sydney, is suddenly confronted by mortality.

His mother dies. Dad is a plumber and has little time for his son's upbringing or education. The boy turns to sport. He's bright, but by the age of 14, his teachers suggested he leave school and learn a trade.

At 20 he's already a self-employed carpenter, making good money in the postwar building boom. On weekends he's the sweep of the champion North Steyne surfboat crew.

In 2016 that same boy is now a multi-millionaire. He owns – and runs – the Australian Development Corporation, Sydney City Marine, a host of associated companies and countless office and housing blocks. He is also one of the world's most successful sailors, having won Sydney to Hobart races in his Ragamuffin yachts and competed eight times for Australia in the Admiral's Cup. He jointly holds the record for the most number of America's Cup campaigns – all self-funded and managed personally.

He is Syd Fischer – 'El Syd' to some, 'Syd Vicious' to others – the Ragamuffin man. He's known as perhaps the toughest and most uncompromising Australian businessman and sportsman of the second half of the 20th century. He lives in a boatshed on Mosman Bay and at 88 was still competing in the punishing sport of long-distance offshore yacht racing. (book flap)