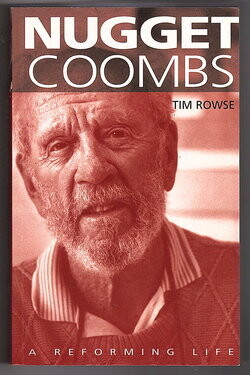 H C Coombs was one of the most influential Australians of the twentieth century. Born in 1906, he is best known as the governor of the Reserve Bank, but the breadth of his activities and his commitment to public life until his death is unsurpassed.

Tim Rowse traces Coombs' life from his childhood in Western Australia to his many roles as a policy maker, change agent, advocate and adviser.

Particularly interested in Coombs as an economist, Tim Rowse shows that a key motif in Cooms' career as a public servant was to foster economic rationality among the political elite that was socially integrative and that looked beyond the strictures of economics to environmental sustainability, scientific and artistic creativity. (back cover)