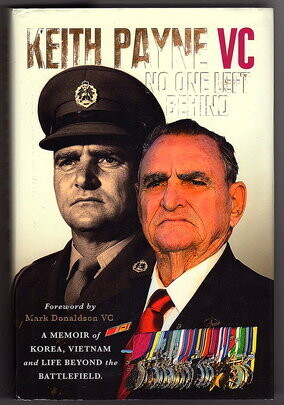 No One Left Behind by Keith Payne VC

Secondhand. Good condition. Wear to book edges, particularly near spine. Some pages in book middle have a wobble due to moisture exposure. Pages are all separated. Otherwise book interior is very good. Dust jacket has some fading to titling on front cover.

From the battlefields of Korea, Malaya and Vietnam to the struggle for veterans' welfare, Keith Payne has never shied away from a fight. More than 50 years ago, this bravery saw him receive the Commonwealth's highest military honour - the Victoria Cross.

Keith grew up one of thirteen children in the shadow of the Great Depression and the Second World War. After seeing his father come home wounded from war, Keith joined the army. He was sent to fight in Korea at just 18 years old, the bloody beginning of decades of military service across the world.

Keith's life was defined by one night in 1969. In the dark jungle of Vietnam, under heavy enemy fire, Keith returned to a fled battlefield to rescue 40 of his soldiers. For his extreme act of bravery in leading his men to safety, Keith became the last Australian to earn the VC for 40 years.

Keith spent decades in the public spotlight while struggling with his own demons, then found a new purpose as an advocate for others. In a lifetime of service, he has helped not only veterans of foreign wars, but also Indigenous diggers and communities left behind by civilian and military bureaucracy.

No One Left Behind tells, for the first time in his words, of Keith Payne's remarkable life. His definitive autobiography reveals the story of a big-hearted, iconic Australian and the heart and heartaches of a man who continues to fight for his mates. (publisher blurb)