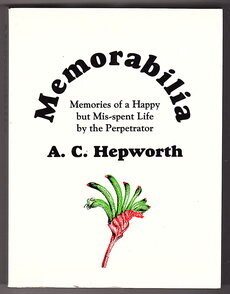 Memorabilia: Memories of a Happy but Mis-Spent Life by the Perpetrator A C Hepworth

Born in Kalgoorlie in the first decade of the 20th century and moving after a few years to the district of Morawa, Alan Hepworth's early life was not easy as his family established a farm in the bush. Having assisted in this Alan struck out for himself, working at many jobs all over the state, including drilling many water wells in the Kimberleys. In his wanderings, he met many people of note - the Durack family and Arthur Upfield to name a few. War service did nothing to damper his humour.

Settling a little with his own family, he became one of the earliest members of the Stirling Road Board, now the City of Stirling Council.