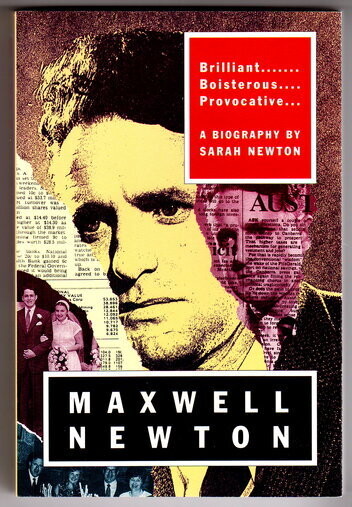 An interesting, courageous and highly readable book about a father who, during his only too short 61 years, both climbed the heights and plumbed the depths of life.

During his extremely brief initial career(1956-1965) as a serious working journalist (until his subsequent New York Post reincarnation in the 1980s), Max first became chief political correspondent for The Sydney Morning Herald in Canberra in 1957.

In 1960, he became editor of The Australian Financial Review, taking it first from a weekly to a bi-weekly and then to its present five days a week, transforming it in the process from rather staid, mainly financial reportage to a lively, vigorous and broadly based daily leader in the national economic and political affairs debate.

After falling out with Warwick Fairfax over the latter's editorial policies in the 1963 federal election campaign, Max resigned from his post on The Australian Financial Review in 1964 and, shortly thereafter, became the founding editor of The Australian.

In 1965 he began publishing from his home in Canberra a growing stream of "insider" newsletters of one kind and another. Between that time and his journalistic rehabilitation by Rupert Murdoch in New York in 1980, Newton's path was, at first gradually and then in the 1970s more precipitously, downhill. (AFR 17/9/21)