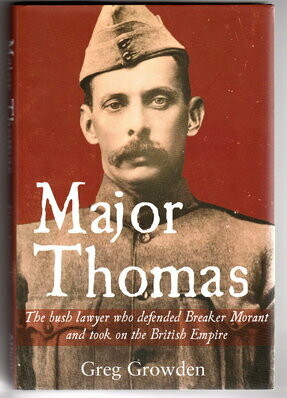 Major Thomas: The Bush Lawyer Who Defended Breaker Morant and Took on the British Empire by Greg Growden

Secondhand. Near fine condition for book and dust jacket.

Major James Francis Thomas was the bush lawyer who was drafted in at the last moment to defend Breaker Morant and his co-defendants of the charge of murdering twelve Boer prisoners of war. Ultimately Thomas lost the case and Morant and Peter Hanock were found guilty and executed.
Thomas is often portrayed as a hero or a fool. Greg Growden however, unravels the truth about the lawyer and soldier who returned from South Africa a broken man and ended his days as an eccentric recluse.

Reminiscences, and family and local histories have produced powerful and oft-repeated narratives. This book moves beyond the oft-told. It tells of Aboriginal history, of people who have ‘always been here, and we always will be here’, exploring women’s and children’s lives as well as those of prospectors and miners, the settlement of ‘Afghans’ and the story of pastoralism.