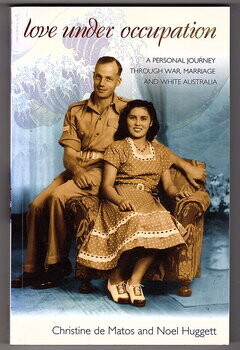 Love Under Occupation: A Personal Journey Through War, Marriage and White Australia by Christine de Matos and Noel Huggett

In 1946, Australian forces were stationed in Hiroshima, tasked with demilitarising and democratising Japan. Noel Huggett was part of the first group of troops to arrive. During Noel's time there, he met and fell in love with a Japanese woman, Reiko (Ruth).

This book tells the story of Noel's and Ruth's courtship under the disapproving eyes of the Australian military, the deliberate obstructions they had to overcome to get married and begin a family and the continued denial of Australian citizenship to their firstborn child.

At the heart of their problems was the White Australia Policy. Noel and Ruth's story reveals the personal impact of such policies in their institutionalised and social forms and the lack of protection of fundamental human rights afforded to Noel and his family - the right to citizenship and the right to marry.